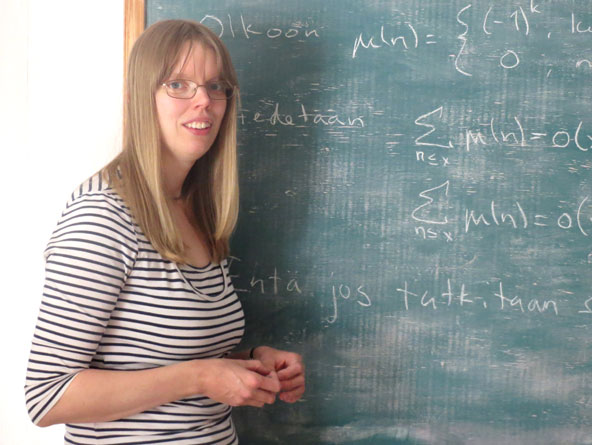 Academy Research Fellow Kaisa Matomäki from the University of Turku receives the New Horizons in Mathematics Prize for fundamental breakthroughs in the understanding of local correlations of values of multiplicative functions.

The New Horizons Prize in Mathematics is $100,000. Prizes are awarded for junior researchers in the field of mathematics who have already produced important work. Matomäki shares the prize with Professor Maksym Radziwill from the California Institute of Technology. Matomäki and Radziwill have collaborated since 2013.

Kaisa  Matomäki  was  born  in  1985  and  completed her master’s degree at the University of Turku in 2005 with a dissertation on number theory. She then continued her studies in London and gained a doctorate  there  in  2009.  Since  then  she  has continued her research in number theory under the auspices of the Academy of Finland. She was appointed to an associate professorship at the University of Turku in 2015 and is at present on leave from that position. She was awarded the Academy of Finland prize for scientific courage in November 2016 and together Radziwill received the SASTRA Ramanujan prize in India in 2016, the statement accompanying the prize being phrased quite concisely  as  “Kaisa  Matomäki  is  one  of  the  strongest young analytic number theorists in the world today.“