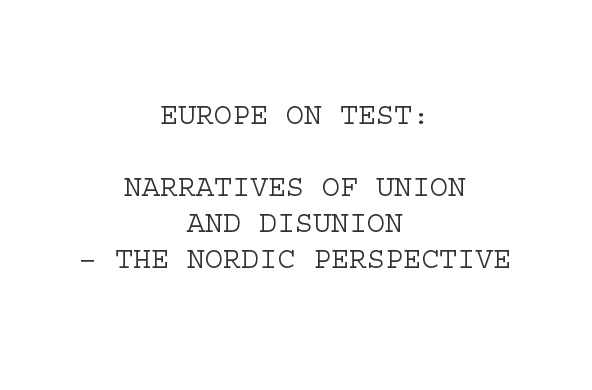 Conference "Europe on Test: Narratives of Union and Disunion – the Nordic Perspective" is held in Helsinki 14 November. Registration open until 31 October. Conference is hosted by the Council of Finnish Academies. It belongs to a conference series managed by ALLEA.

Europe on Test: Union or Disuninon conference is hosted by the Council of Finnish Academies. It belongs to a conference series managed by ALLEA and is organized in collaboration with all Finnish science academies.

At the heart of this dialectic of “European Union and Disunion” are deeply rooted narratives shaping the way we conceive Europe. All sectors, including the public and the policy-makers, the media, the scientists and the scholars, are deeply influenced by such narratives, which determine how we think, act and feel. While narratives are entrenched in long standing cultural, social and economic customs, traditions and institutions, they are not static. They move, overlap and transform over time and space, competing and often contradicting each other.

They are the prism through which emotions about Europe are refracted.

”Europe on Test: Narratives of Union and Disunion” – a series of seminars hosted by selected Academies of Sciences and Humanities in various European cities and coordinated by ALLEA – will address these and other aspects of relevance for the future of Europe as a community. Renowned scholars will debate and illuminate the significance of such narratives from a variety of different angles and within their national contexts.

Symposium registration is free of charge, complimentary coffee is served for all registered guests. The guests are responsible for their own travel and accommodation arrangements.

The Nordic perspective on Europe will be explored at the conference organized by The Council of Finnish Academies at The House of the Estates Helsinki on November 14, 2018.

The focus of this conference will be on the role of the Nordic societies in the European and global context. The speakers will debate about the essence of the Nordic welfare state and about the legacies of history on the ideas and ideologies in the Nordic countries.

Then the focus will move to the present times and Nordic societies struggling with issues of migration and multiculturalism giving room for populism and extremist political movements with the aim/under the banner of defending the traditional Nordic values.

In the final session, “Nordicness” will be under the loupe of renowned experts who will reflect from a non-Nordic angle on what has been said during the sessions.