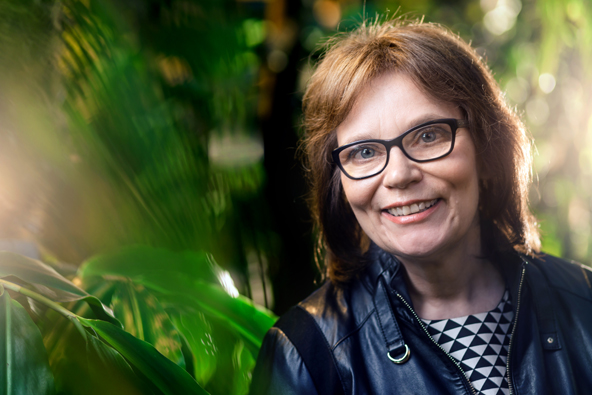 Academician Eva-Mari Aro was awarded the Finnish Academy of Science and Letters Academy Award 2018. Academician Aro, molecular biologist and professor at the University of Turku, is one of the world’s leading experts on photosynthesis.

”Photosynthesis could be a significant source of energy in the future,” claims Academician Eva-Mari Aro, the recently announced recipient of the Finnish Academy of Science and Letters Academy Award for 2018.

The process of photosynthesis in plants and cyanobacteria converts the energy present in sunlight into chemical energy, resulting in the creation of biomass. In the course of several millions of years this biomass has become compressed into fossil fuels, which are the principal sources of energy known to man. Now scientists are busily looking for means by which they can redesign this photosynthesis process and harvest the clean energy that it is capable of generating.

Academician Eva-Mari Aro, molecular biologist and professor at the University of Turku, is one of the world’s leading experts on photosynthesis. She has been professor of molecular plant physiology in Turku since 1987 and was a professor with the Academy of Finland in 1998–2008 and returned to that position in 2014. She is also head of the Academy of Finland’s Centre of Excellence in Molecular biology of primary producers.

Aro and her research team set out to investigate how the photosynthetic mechanism in living organisms can be adapted to produce exploitable chemical compounds by means of light, in accordance with the aims of sustainable development. The evolution of life on Earth owes its origins to the photosynthetic mechanism which first appeared in cyanobacteria, or blue-green algae, in which sunlight splits water into hydrogen and oxygen atoms, which then form hydrocarbons and release oxygen into the atmosphere. Aro and her team now hope to adapt photosynthesis for direct and efficient production of new chemicals and energy without a biomass phase by applying synthesis biology approaches.

”Photosynthesis itself has been functioning in virtually the same manner for billions of years, but cyanobacteria and plants have developed quite different defence mechanisms in the course of evolution in order to ensure their survival. Photosynthesis as such is a highly oxidative process, and therefore self-destructive if the defence mechanisms fail, and the natural variations in environmental conditions place further demands on the efficiency of these defence mechanisms,” Eva-Mari Aro explains.

”Our current research is very much concentrated on the mechanisms that regulate photosynthesis, in addition to which we gain a great deal of the information needed for developing new types of applications directly from basic research. Once we have an understanding of the process of photosynthesis and the mechanisms that protect it, we will be able to manufacture algal and cyanobacterial cells to produce the desired chemical compounds and generate clean energy.”

”Hydrogen, which is one of the purest carriers of energy, is produced naturally by algae and cyanobacteria, but in recent years we have been able to substantially increase the efficiency of that bioprocess. Living cell factories offer us great prospects for the future,” Aro reckons.

Although research into photosynthesis has been going on for a long time, the development of applications for its mechanisms really took off only in the face of the threats posed by climate change. In 2006 a group of scientists studying photosynthesis got together to consider the possibilities for replacing fossil fuels with artificial systems and living cell factories that imitate the mechanisms involved in photosynthesis. Eva-Mari Aro was one of these scientists, and under her direction Finland has become one of the world’s leading countries for photosynthesis research.

”My next task would seem to be to ensure the continuity of this research in Finland. The potential that lies in photosynthesis as a means of generating clean energy has now been realised by the EU Commission, which has drawn up a road map for the adoption of this technology.”

In order to attract researchers into this field and achieve results as quickly as possible, the EU Commission has also announced a prize of five million euros for a prototype of an artificial photosynthesis system.

”More than 10 years passed after our first meeting in 2006 before the EU commission showed any interest in the scenarios that European photosynthesis experts were putting forward, but as climate change has progressed, it has become evident that there were no easy answers to the problem of replacing fossil fuels with clean technology. This means that investments have to be made now in technologies of the future such as artificial photosynthesis and efficient living cell factories,” Professor Aro claims.

Eva-Mari Aro has received numerous prizes and distinctions in recognition of her work and has been appointed to many honorary positions in Finnish and international scientific and science policy organizations. She was elected Professor of the Year in Finland in 2013 and was awarded the title of Academician in 2017.

Eva-Mari Aro became a member of the Finnish Academy of Science and Letters in 2001 and was its vice-chairman in 2012–2013 and chairman in 2014–2015. It was during these years that the work of revising the Academy’s rules and modernizing its practices was undertaken. She was later appointed vice-president of the European Academies’ Science Advisory Council (EASAC) for the period 2017–2019.

The Finnish Academy of Science and Letters Academy Award, of value 30,000 euros, is being presented this year for the 74th time. Academician Aro will also receive the Academy’s Medal (No. 30).